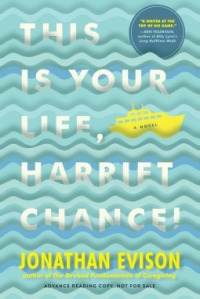 Jonathan Evison drew me into his bittersweet novel, This is Your Life, Harriet Chance,  right away with his unusual protagonist, Harriet Chance, who reflects about the trivial and highlights of her life which didn’t turn out according to her plans. As a widow of two years , still exhausted after caring for Bernard, her Alzheimer’s afflicted husband, she discovers he entered a drawing for an Alaskan cruise – and won. She uses this opportunity to scatter his ashes, with dreams of moving on into her twilight years. Harriet believes Bernard visits her frequently and speaks with him,  as if he were still alive. These conversations reflect the highs and lows of her life, alternating between sweet and  sad.  During the cruise, a lifetime of deception is revealed to her.

The narration jumps from Harriet at age nineteen, then to Harriet at age sixty. The out-of-order narration style often distracts in most stories,  but Evison’s choice of this narration complements the ups and downs of Harriet’s life. Harriet is endearing, but not without faults of her own. Sometimes she is the victim and other times the perpetrator of wrongs done to others. Above all,  Harriet is human, and Evison captures the joys and regrets of a twentieth century woman’s life.

This is a charming novel about soldiering on through disappointment, when your dreams don’t work out as you had hoped, and how love can both surprise and injure us. .Highly recommend.

I received a copy of the book from NetGalley in exchange for an unbiased review.

Given your warmth now

Your love will be here.

To be read as:

Given your warmth now, seeing the happy future.

Seeing the happy future, your love will be here.

THE SNOW KIMONO BY MARK HENSHAW

The Snow Kimono is a poetic novel about two men reflecting upon their lives. A friendship between Jovert, a recently retired French Inspector, and Tadashi Omura, a Law Professor, is prompted after Jovert receives a letter from a woman claiming to be his daughter. Both men exchange stories about their experiences with loss, betrayal and love. Their stories branch out into seemingly unconnected directions, ending with an ungratifying twist.

Although Henshaw’s lyrical descriptions of Algiers and Japan were beautiful, it didn’t compensate for the confusing subplots within a plot narrative and the constant shift of narrators. I rated this book as 3 out of 5 stars since I enjoyed Henshaw’s poetic prose more than the story itself. I’m sure other readers may enjoy this book for it’s lovely prose, but I found myself slogging through this obtuse read, relieved when it ended.

An advanced reader’s copy of the book was provided to me by Netgalley in exchange for an unbiased review.

In my short time on earth so far (ok, 48 years, whatever!)
The people who helped me during the roughest time in my life
Were the ordinary, unassuming ones
People that I barely knew from work

These ordinary people were Angels

Meanwhile, the loudmouth do-gooders
Were nowhere to be found

I ran from house to house to get help
From the “good folks in the community”
That lived on my street
Out of three houses
Two people never answered their door, even though they were obviously home
At the last house, she opened the door
As soon as I asked for help
She held up her hand like a policeman, nodding her head “No”
Slammed the heavy mahogany door in my face

So next time
Pay attention to the unassuming, ordinary ones
They will help you
Faster than the ones who advertise their goodness.

This is a crazy Five Minute Friday attempt, so thanks for giving me the freedom to try something totally different today. You can be a part of Five Minute Friday too. Just head over to http://lisajobaker.com and you’ll find all the details, along with a bunch of fantastic posts and supportive community. Thanks for reading today!

It’s been nearly twenty years since my father died, and he’s still at the forefront of my mind. My father taught me many important life lessons. By being successful in business, he showed me the importance of perseverance and hard work. He was a reserved, understated man, who showed his love, compassion and generosity by taking care of our family and making sure we were happy. Material possessions weren’t important to him. During the summer, one of his greatest pleasures was walking Bonnie, our chubby yellow Labrador Retriever, along the beach.  According to him, this is where he conjured up his best thoughts.

My father was always a bit of a puzzle to me. On typical gift giving times, such as birthdays or Christmas, he insisted that I not buy him anything. He said he already had everything he needed.

I never realized how many lives he touched until I saw hundreds of people show up at his wake. People that I’ve never met, introduced themselves and told me how much my father helped their family, by paying bills, giving a family a car or helping someone get a job.

The best gifts we can give or receive are the ones we can’t see. I wish more people would understand this concept.

Dad, I love and miss you very much. Happy Father’s Day.