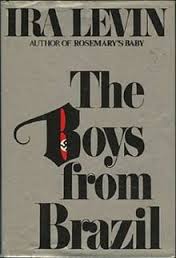 Today’s prompt for the A to Z challenge is the letter “B”. I’m reviewing the 1970’s thriller,”The Boys from Brazil” by Ira Levin.
Ira Levin blends the elements of sci-fi with the vile intentions of an evil Nazi Doctor who intends to recreate a Fourth Reich. Dr. Joseph Mengele, director of the human experiments at Auschwitz during WW II, hatches a plot to bring back a new and improved “Fourth Reich”. Using a plan to clone Hitler’s genes, Mengele positions the young Hitler’s in locations throughout the world, in families like Hitler’s own, with the intention that of one of the boys will grow up to become a “new” Hitler. (At the time of the publication of this book, Mengele was still alive and hiding out in South America.) Meanwhile, the aging Nazi hunter Franz Lieberman uncovers the plot, working against time constraints, Nazi hit men and the fractured mindset of Dr. Mengele to stop the scheme in its infancy.

The idea of extracting genes to create clones seemed far-fetched back in the 1970’s. Today, genetic cloning is a common practice. It’s a chilling thought that a person with malicious intentions could perhaps wreak havoc with the human race. With sharp dialogue and increasing drama, this fast paced thriller will keep you on the edge of your seat until the end.