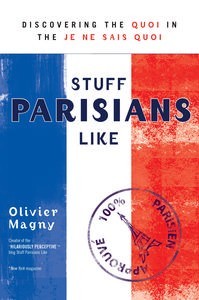 STUFF PARISIANS LIKE: DISCOVERING THE QUOI IN THE JE NE SAIS QUOI BY OLIVIER MAGNY

Stuff Parisians Like is a tongue-in-cheek look at Parisians and their idiosyncracies. Specifically, Magny makes fun of “BCBG”, “Bon Chic Bon Genre”, the upper middle class Parisians. Similar satirical books have been written mocking upper crust societies. For upper middle class white Americans, we have the book Stuff White People Like. The British have The Sloane Ranger, poking fun at the British upper crust.

Stuff Parisians Like is a light and entertaining read geared towards an American audience. If you’re easily insulted, this book isn’t for you. Magny discusses how Parisians react when discussing Americans:

“Parisians have a bit of a different physiology. Things like a certain inability to smile are quite well-known expressions of this phenomenon…When hearing the phrase “Les Américains”, the Parisian will implacably lose track of his previous ideas to just be taken over by one overpowering thought…”Oui, mais les Américains, ils sont cons.” It would be impolite at that point to bring to the Parisian’s attention that he starts to sound like the stupid American he despises so much…Plus, despite his obvious in-depth knowledge of America, chances are he might not get the joke…”

I’d recommend this to a Francophile, someone who has lived in Paris or going on vacation to Paris.  Keep in mind, Stuff Parisian Like should be taken with “un grain de sel.”